HOME > VISITING > ABOUT US

Medieval Huis Bergh castle is surrounded by a moat and half of it is enclosed by an embankment. Its building history goes back as far as the 13th century.

Little is known about the earliest history of Huis Bergh Castle. It is believed that around 1100 AD a wooden tower was raised on a little island in a swamp. Around 1200 AD this wooden tower, or donjon, came to be replaced by a round tower. The remains of this tuff tower can still be seen in the wall left to the present main entrance door to the great hall. In subsequent years the main castle building was enlarged upon.
At the onset of the Eighty Years’ War Huis Bergh Castle was seriously damaged.
In 1735 the main castle building was completely destroyed by fire.
In 1939 the castle was once again struck by fire. Van Heek, who had acquired the castle in 1912, immediately took on restoring the castle. 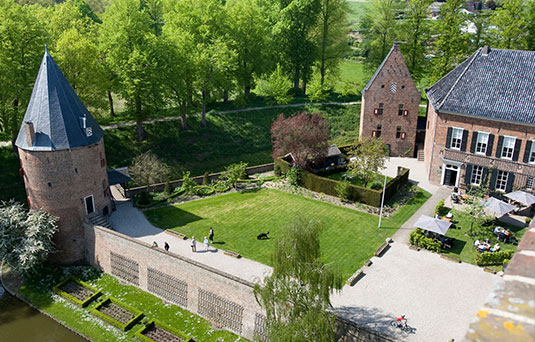 Huis Bergh Castle is the ancestral home of the Bergh lords and later counts. One of the best known Bergh counts was Willem van den Bergh, who in 1556 married Maria van Nassau, the sister of William of Orange. The year 1712 marked the end of the Van den Bergh line. Via the female line, the castle and its possessions passed into the hands of the South German aristocratic family Von Hohenzollern-Sigmaringen.

The Hohenzollerns were never really interested in their Dutch possessions. They sold the majority of the Bergh estate grounds. The castle was eventually rescued when in 1912 Jan Herman van Heek bought it, its rights and its possessions from Prince Wilhelm.

Jan Herman van Heek, an industrialist from Enschede, was deeply fascinated by the Middle Ages. This fascination inspired him both in the way in which he restored the castle and in the art he collected.
In 1946 Van Heek transferred his ownership to the Huis Bergh Foundation, aiming to preserve castle, art collection and surrounding woodlands for posterity.

Huis Bergh castle is located on the German border in a beautiful area that is ideally suited to hiking and cycling. In nearby Zeddam Huis Bergh Castle’s towermill can be visited. It is the oldest working Dutch windmill.

The permanent collection of Huis Bergh Castle includes early Italian painting, Northern European painting, historic portraits, medieval manuscripts, coins and sculptures. The collection was built between 1912 and 1957 by the then owner of the castle Jan Herman van Heek. The beautiful ornate manuscripts and incunables are of great national and international importance.

The Antoniuszaal (Anthony Room) houses a substantial part of the collection. It is a very calming and inspiring room. A 15th century rood screen leads to the central part of the room with medieval sculptures, ivories, late medieval paintings and of course the manuscript collection. Each year Huis Bergh Castle organizes a temporary exhibition.

A wealth of stories and history 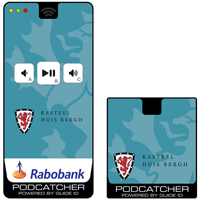 Huis Bergh Castle is one of the largest castles in the Netherlands. Discover the roots of our royal family and enjoy the extensive art collection. Click here for more information on opening times and ticket costs.